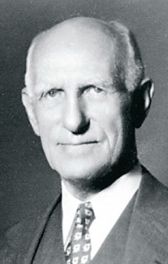 The name Laubach comes from the originator of the Laubach Way, a method of teaching English by tutors who do not speak the learners’ first language. Frank Laubach was a missionary who served in the Philippines in the early 20th century. He began working with an indigenous tribe that had no written language. He sorted out the 16 sounds of their language and assigned one letter of the Roman alphabet to each sound and then created a pictorial alphabet. For example, the ‘s’ sound was pictured as a snake.

He eventually worked with native speaking teams in over 100 countries that included more than 300 languages and dialects. Word of his success spread, and he was eventually called “Mr. Literacy” by TIME Magazine. Lowell Thomas called him the “greatest teacher of our time,” and on his 100th birthday in 1984 the U.S. Post Office honored him by placing his picture on a postage stamp in the Great Americans Series.

In San Diego, the first organizational meetings, which included Dr. Frank Laubach, began in Vista, California, in 1957. Friends of Dr. Laubach, calling it the “North San Diego Literacy Council,” initially founded the Council in 1961. Early tutoring centers were located in Vista, Escondido, Fallbrook, and Oceanside. From 1968 to 1974, centers in Solana Beach, Encinitas, and Rancho Santa Fe composed the “San Dieguito Literacy Council.” In 1971, additional centers were established in Carlsbad, Camp Pendleton, and Ramona.

In 1976, the name was changed to “San Diego Literacy Council.” A final name change was filed in 1984 to “Laubach Literacy Council of San Diego County, Inc” and it has remained under that name.

Your ticket for the: History